Renée Vivien (1877-1909) was an Anglo-French lesbian writer of the Belle Époque. For more information on her life, work, and times, I recommend the biographical and critical works by Jean-Paul Goujon, Virginie Sanders, and Nicole Albert.

My book of translations from Renée Vivien’s poetry, A Crown of Violets, is available through Headmistress Press.

Press for A Crown of Violets

Watchlisted by M. Bartley Seigel at Words Without Borders, my translations have been reviewed by Julie Enszer for Lambda Literary—

by Maryann Corbett for The Rumpus—

Samantha Pious has not held anything back about the in-your-face sexiness (the academic phrase would be “the transgressive nature”) of Renée Vivien and her work.

and by Carolyn Gage on her blog:

Vivien suffered from an occupational hazard not unknown to this lesbian writer. She fell in love with the utopian worlds of her own artistic vision […] What she has left behind is her siren song, calling us to remember that time that never was, to entice us to join her in the realm of dreams… and may heartier spirits than hers apply these visions toward the creation of a flawed, but kinder lesbian reality. 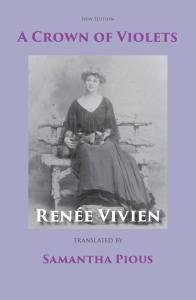